So far this year we had 2 calves. Unfortunately both of them had selenium deficiency issues manifesting as mental slowness (in one case an inability to figure out how to nurse) and severe muscle tone issues. We have worked with a vet to resolve these issues and had to bottle feed both of these calves, though Jojo was able to stay with his mom and transition to nursing. Benny however had severe muscle tone issues. It took two weeks before he could stand! It took several days for him to be able to hold his head up on his own. But thanks to the great vets at Northern Veterinary both are doing so so much better now. It is really cute to see them interacting with each other. If they are put in the separate pens with their mothers they will call for each other.

I was able to get a video of them this morning. Though of course as soon as I turned the camera on they calmed down. But after a bit they started playing again.

I also introduce you to our birds at the end of the video.

One quick note I did accidentally call Benny Jojo at one point in the video. Benny is the one standing at the back.

Lately my digestion has been feeling a bit off. Mostly it has been just a low grade nausea. I hope to soon start an elimination diet to test for food allergies but since it is a big commitment of time (3-6 weeks) I want to have it planned out well. In the mean time I had been researching using bitter herbs to create a bitter formula for digestion.

I had come across a couple references to Swedish bitters but I was looking for a DIY recipe to try versus already mixed dried herbs or powders. I did not find anything that seemed to really fit me so I decided to create my own formula by using herbs I am drawn to and that grow in my garden. I used this basic recipe and this article about how to customize.

I picked herbs that I could use from my garden. But couldn’t decide on just one recipe so I made 2.

To make both you put the fresh and dried ingredients in the bottom of a sterile quart jar and and fill with your desired menstrum. In this case either vinegar or vodka. I wanted to try one of each. I then let it sit for 4-6 weeks, strain and put in dropper bottles. 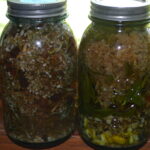 The bitter flavor of these herbs helps make sure your digestive system is running in tip top shape.

It began with worries. Without going into too much detail I, like many others right now, I am worried about our economic future. While for this very instant, this day, we are safe, I was worried about what the future weeks and months might bring. I have been doing a lot of work trying to be more present but this was really testing me. At one point in the early morning the Bible Verse (Matthew 6:34) popped into my mind. It says not to worry about tomorrow because, “Sufficient unto the day is the evil thereof.” Ok that sounds really horrible the the idea that there is enough stuff to worry about in the present is what I got out of it.

Little did I know I actually had alot to worry about in the present (yesterday. When we went out to do chores we were missing 5 cows–2 of them were pregnant and due in a couple weeks so actually more cows were missing. We have discovered that our cows need a hard, high fencing and had spent weeks making a beautiful pen last year next to our greenhouse. We didn’t put a fence up over the greenhouse wall but instead used the wall as part of the siding and the cows broke through the plastic of the green house and walked out the front door, and onto the road. We followed their tracks for about 1/2 mile up the road. Stopping to ask our neighbors if they had seen a herd of cows walking past. It must have happened overnight because no one had seen anything, but many of them came out to help us search. One lady said she thought they were in a field about 1/4 mile off the road, behind all the houses.

Another friend from further up the road had heard we were looking and called to say her husband, who is a pilot and keeps a two seated Cessna at the local airport could take one of us up to look for them. I was beginning to be overwhelmed with the kindness offered us but the worry of the missing cows was keeping it at bay.

After 1 hour of on foot searching we took to the air. Avril was the lucky one to go up in the plane. Within about 15 minutes I got a call, they were spotted, in a field next to a drainage ditch–right where the first lady spotted them. But now we had it narrowed down.

She sent me a picture with the text, “follow the plane.” So I set out following the plane, but then the road ended and I needed to continue on foot. This is a huge field. I was at a neighbor’s house, he wasn’t home but his dogs were loose and they followed me into the field. I was a bit worried but I was also not sure what else was in the field. We had seen a lot of bear poop while searching and an area of the corn field where the bear had previously feasted on corn.

It was a long walk, I finally found them, then the dog scared them, they scattered and I lost them again, though one got caught in a barbed wire fence. I decided I needed to secure the dog. By now the pilot and Avril were back on the ground and helping and luckily he had a length of rope in his car and we were able to secure the dog and take him back home.

I decided to go back for the cow stuck in the fence. By that time he (a young steer) had freed himself and calmed a bit but was now worried that his herd was gone.

A call came that the other four had returned to the road and the neighbors had chanced them home. Two and Avril then worked to get them back in their fencing (a different paddock that we have never had issues with) and Proeun, Mavis and I began trying to corral the one lone steer home. He got stuck trying to cross the drainage ditch ( I had previously crossed this ditch) and we were able to get a lead on him. He promptly refused to move. After another hour of trying to pull him we decided to drop the leads and corral him home cowboy style–though we were on foot. He calmly walked home and with one one minor mishap we were able to get him in the pen.

So from 10-4:00 I was reminded that there is enough to worry about in the present and I don’t need to worry so much about the future. Hopefully I remember the lesson so I don’t have to learn it again in a similar fashion anytime soon.